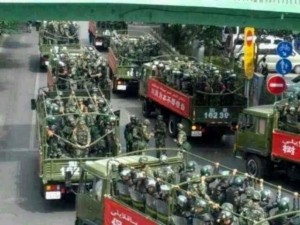 Beijing Cracks Down On Uyghur Unrest In Xinjiang Province, Blames US for Encouraging ‘Terrorists’

Last week, a clash between local Uyghurs and Chinese police officials in China’s Northwestern Xinjiang province left 35 people dead, including Chinese security personnel, and several others injured. Subsequently, Chinese state media blamed the United States for encouraging “terrorism” in the Xinjiang area where riots erupted, instead of long-witnessed ethnic tensions in the region. Beijing has vowed to crack down on the “terrorist groups” that were responsible for the stabbing and killing of several policemen in the area.

China’s central government has also stepped up their military presence in the area, conducting military exercises ahead of this Friday’s anniversary of major riots that took place in 2009, a traumatic episode that highlighted mounting tensions between the Uyghur minorities and Han Chinese, which left roughly 200 people dead.

“We will step up actions to crack down upon terrorist groups and extremist organisations and track the wanted,” Yu Zhengsheng, a member of the Party’s Politburo Standing Committee, said, according to the state news agency Xinhua.

The People’s Daily, a state-run newspaper that operates as the mouthpiece for the Communist Party, has alleged that the U.S. government and “foreign media” have played a role in inciting the violence in its western autonomous area. “For fear of a lack of chaos in China,” the People’s Daily commentary said, the US was “conspiring to direct the calamity of terrorist activities toward China.” “America’s double standards on the issue of countering terrorism is no different than incitement and indulgence … How is this different than those who act as accomplices to terrorism?” the report said.