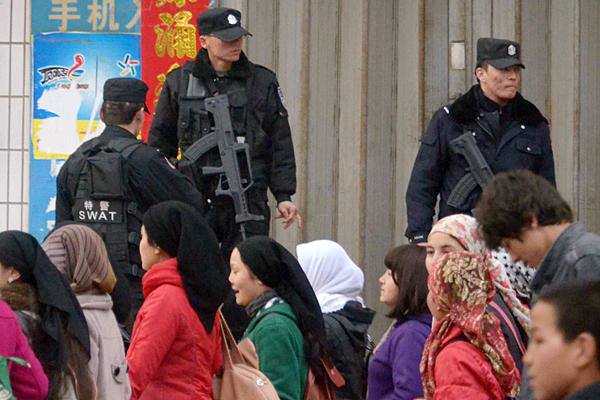 An assault on a police station in the northwestern region of Xinjiang ( aka East Turkestan ) has left eleven dead, according to the local government, in the latest of a series of attacks pointing to growing unrest in the area.

Two auxiliary police officers and nine attackers were killed in the incident on Saturday afternoon, the Xinjiang regional government said in a statement posted on its microblog on Sunday.

It said the assailants used axes and knives in the attack in Bachu county’s Serikbuya township, near the historic city of Kashgar, adding that two police officers were injured in the clash.

No further information was given about the attack. The Chinese government has been blaming recent attacks on “terrorists” from the Xinjiang Uyghurs ethnic group.

But Dilxat Raxit, a spokesman for the World Uyghur Congress, a Munich-based advocacy group, said the Uyghurs were protesting on Sunday and that armed Chinese personnel were to blame for the violence.

He said in an email that besides the deaths, “several tens” of Uyghur demonstrators were arrested.

“I again call on international society to take emergency measures to stop the Chinese government from directly opening fire to suppress Uighur protesters and depriving them of using legal appeals and defending their rights,” he added.

Activists say despair over economic and social discrimination as well as cultural and religious restrictions are fueling anger among Uyghurs.

The latest reported incident comes at a time of heightened tensions within Xinjiang ( aka East Turkestan ) following a fiery attack in Beijing’s Tiananmen Square last month that the government blamed on “terrorists” from the province backed by some international Islamic groups.

Three Xinjiang Uyghurs drove their car loaded with petrol canisters into the gate of the Forbidden City on October 28. The attack left two dead besides the three people in the car, and 40 injured, according to Chinese police.

Beijing blamed Uyghur separatists backed by armed Islamic groups, but the authorities have not provided any evidence to support this assertion, which has raised doubts among experts, given the amateurish nature of the attack and the lack of an established Islamic extremist foothold in China.

Eleven Killed in Raid on Police Station in East Turkistan