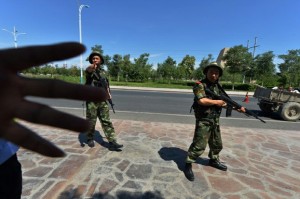 Fresh violence broke out in Xinjiang Friday in the second shooting in two days, with one resident saying that at least two ethnic minority Uyghurs may have been shot dead by police.

Sources said that the shooting took place as a group of Muslim Uyghurs were returning home following midday prayers at a mosque in Hanerik township near Hotan (in Chinese, Hetian) city.

“As a group of young Uyghurs on motorcycles were leaving the mosque, they were shouting religious slogans,” a resident told RFA’s Uyghur Service, speaking on condition of anonymity.

“The police were frightened and started shooting at them … At least two died and one was injured.”

The deaths and injury could not be independently verified.

In Friday’s incident, the source said that the Uyghurs were angry that police had “stormed into the mosque and surrounded it” during prayers last week because the local imam, or religious leader, had allegedly refused to keep his sermons in line with official thinking.

“The people were displeased” and had banded together to express their anger, the source said of Friday’s shooting.

Reports suggested that the group of Uyghurs then traveled into Hotan city and began to riot.

A woman reached by phone in the city told the Associated Press that young men had set a number of fires on a pedestrian street near Tuanjie Square at around 3:00 p.m.

AP said that the woman, who lived near the area where the attack occurred, did not provide her name for fear of government reprisal. She said people were being prevented from leaving their homes or gathering on the street in the aftermath of the unrest.

An employee who answered the phone at the Yangguang Guesthouse near Tuanjie Square told RFA that the violence had happened nearby, and confirmed that the attackers were Uyghur.

He said the city was extremely tense, with police patrolling the streets, and businesses shut down in the wake of the attacks.

“We are closed today, because of the violence,” he said.

The guesthouse staffer said that police had “managed to impose order” since the unrest.

“They did that right from the start. There are [armed police] everywhere in Hotan now, police everywhere. But it’s not martial law.”

Other sources said that mobile phone services to the area had been temporarily shut down.

State-run CCTV provided few details about the unrest other than saying “a violent attack” had occurred in Hotan and that the “incident has been resolved.” It did not provide a number of casualties.

Police chief Metsim Mamtimin of Hanerik township confirmed that an incident had occurred, but said he was too busy with the investigation to answer questions.

“The station is too busy right now with police coming in and out, changing clothes and reloading their ammunition,” he said.

“I’m unable to ask them what’s going on.”

Meanwhile, there has been conflicting information on the number of casualties in Wednesday’s violence in Pichan (in Chinese, Shanshan) county.

Chinese authorities said 35 people were killed, up from an earlier toll of 27, in the “terrorist incident” sparked by an attack on police stations and other government establishments by a “knife-wielding mob,” state news agency Xinhua reported.

The revision in the number was attributed to people who had been hospitalized, but had succumbed to their injuries, it said.

But based on accounts given to RFA’s Uyghur Service by officials and residents, as well as an imam who helped conduct the burial rites for security personnel who perished in the clashes, at least 46 were killed in the violence in Lukchun township, whose residents are mostly minority ethnic Uyghur Muslims.

Dilxat Raxit, Sweden-based spokesman for the World Uyghur Congress (WUC), said that 67 Uyghurs had been detained by authorities following the Lukchun incident, with the youngest just 13 years old.

No reasons were cited for the Lukchun violence, believed to be one of the bloodiest since unrest in the Xinjiang capital Urumqi killed nearly 200 on July 5, 2009, but one blogger suggested it was triggered by forced housing demolitions and rezoning of areas.

Sources said that after the incident, authorities quickly moved to block Internet access and placed the town under martial law. They said telecommunications had also been cut off in the town.

A resident of Lukchun named Wang Qiaojun wrote in a blog post on Wednesday that the government should not try to blame the violence on terrorism or Uyghur separatism.

“What happened today is a tragedy directly related to forced demolitions and the rezoning of residential land [in the area], as well as a deepening disconnect between the people and local officials,” he wrote.

“Members of all ethnic groups find it really intolerable that officials are forcing residential land to be rezoned for a Pichan country daily waste treatment facility and cultural project which was stalled long ago.”

He said residents had refused to give up their land and township officials had responded by shutting off the water supply for more than 20 days and deploying riot police to force people from their homes.

The U.S.-based Uyghur American Association on Friday rejected claims by the Chinese government that the violence in Lukchun was an act of terrorism, calling for “an independent verification” of the events.

“What we see emerging from the Lukchun incident is a government struggling to save face before the world for the devastating effects of its failing ethnic policies,” UAA President Alim Seytoff said in a statement.

Residents of Urumqi said that security was tight, with increased patrols in the regional capital, following the two incidents and ahead of the sensitive anniversary of the riots that left 200 dead in 2009.

“It isn’t far from Turpan to Urumqi. The fires are springing up everywhere now, so of course the authorities have to be prudent and wary.”

A tour operator in the capital said trips to Turpan had been canceled.

“We’re under alert and there are a lot of security checks in Urumqi right now. The armed police have arrived in the past few days,” he said.

“There aren’t so many tour groups going [to Turpan]. They’ve been canceled. I heard some people didn’t show up.”

Rights groups say that the Chinese authorities are indiscriminately jailing Uyghurs in Xinjiang in the name of fighting terrorism, separatism, and religious extremism, and are intensifying the influx of Han Chinese in the region.

Beijing Cracks Down On Uyghur Unrest In Xinjiang Province, Blames US for Encouraging 'Terrorists'