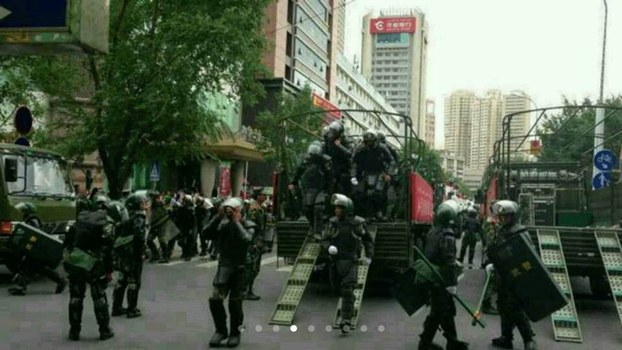 Local authorities in China’s Xinjiang region confirmed at the weekend that police fired at hundreds of minority ethnic Muslim Uyghurs protesting the arrest of a young religious leader and closure of a mosque, acknowledging that up to 15 people may have been killed and 50 others injured in the latest violence to hit the volatile region.

The confirmation of the shooting and fatalities during protests by up to 400 Uyghurs in Hanerik township near Hotan (in Chinese, Hetian) city on Friday came as Beijing staged massive military exercises in the Xinjiang Uyghur Autonomous Region and dispatched officials on Saturday in an apparent bid to restore order in the far western region.

The move to beef up security followed a meeting of the ruling Chinese Communist Party chaired by President Xi Jinping, indicating concerns among the top leadership over the rising violence in Xinjiang ahead of the anniversary of the July 5, 2009 riots in the Xinjiang capital Urumqi which left nearly 200 dead.

“There are deaths and injuries, but I don’t know the exact number. Police officers will send us the reports soon,” he said on Saturday, adding that the recent spate of attacks by Uyghurs in Xinjiang had stemmed from “radicalism.”

Separately, the head of one of 30 villages under the Hanerik township said up to 15 people may have died in the Hanerik violence, which was triggered by Uyghur protests following the arrest of several Uyghurs, including a young local “imam,” or religious leader, and the closure of his mosque.

“I assume 10 to 15 died and more than 50 had been injured” when Chinese security forces prevented a march by hundreds of Uyghurs protesting over the mosque issue, Abdulla Metkurban, the Communist Party chief of No. 13 village in Hanerik, told RFA.

He said that during a party meeting at the township late Friday, he and other village chiefs in Hanerik had watched a “bloody” video of the protests provided by the security authorities aimed at identifying some of the demonstrators for the police.

“The number of demonstrators were in the range of 300 to 400. All of them were marching towards Hotan city,” he said.

When police blocked the demonstration and began to arrest some of them, the protesters bolted in motorcycles and cars, he said.

“So police opened fire on those who tried to run away. As a result some of them died and some got injured.”

Abdulla Metkurban believed that at least 200 protesters were arrested, saying that at least seven from his village alone had been nabbed amid a house-to-house screening exercise in the area.

Chinese authorities said 35 were killed in the incident, but according to accounts given to RFA by officials and residents, as well as by an imam who helped conduct the burial rites for security personnel who perished in the clashes, at least 46 had died.

Local officials also said at the weekend that least three people were killed in separate violence in Tuanjie Square in Hotan city on Friday amid conflicting reports on circumstances that led to the incident.

Abdulla Metkurban said he was informed that a group of Uyghurs attacked five Han Chinese with knives, killing three and injuring the others, triggering a security clampdown and arrests.

But a local Uyghur farmer told RFA that more than 200 people from Tuanjie Square had marched on the streets after Friday prayers to protest against “oppression,” resulting in a crackdown.

“So far, I learned that there were more than five deaths … but many injuries, I don’t know exactly,” he said.

Hotan has reportedly been under a curfew since Friday night, and searches for the town on Sina Weibo, China’s version of Twitter, were blocked on Sunday, according to Agence France-Presse.

Amid the raging violence, Beijing has vowed to ramp up patrols and crack down on “terrorist” groups as massive military exercises were held Saturday in Xinjiang’s capital Urumqi.

“We will step up actions to crack down upon terrorist groups and extremist organisations and track the wanted,” Yu Zhengsheng, a member of the Party’s Politburo Standing Committee, said after arriving in the capital, the state news agency Xinhua reported late Saturday.

He called for “24 hour patrols [in] all weather conditions” according to a report by the state news agency on Sunday.

Saturday’s exercises saw large sections of the city shut down as military vehicles took to the streets with at least 1,000 personnel from the People’s Armed Police, part of China’s armed forces responsible for law enforcement and internal security during peacetime, AFP reported.

The state run Global Times newspaper Sunday described the exercises as “ceremonies … to support the fight against terrorism.”