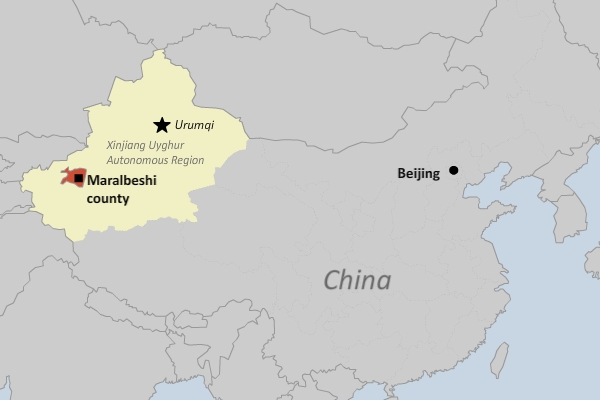 Chinese authorities posted unarmed Uyghur auxiliary policemen at the frontline of an attack on a police station in Xinjiang (East Turkistan) which left three of them dead before a SWAT team gunned down the assailants, witnesses and family members of the deceased said Friday.

The authorities had said that nine ethnic Uyghur youths, armed with knives and sickles, were shot dead while storming the Siriqbuya (in Chinese, Selibuya) police station in Kashgar prefecture’s Maralbeshi (Bachu) county last week in a possible suicide mission.

Family members of two of the three dead auxiliary policemen —Yusup Kadir, Ehmetjan Omer and Tahir Obul —said they had learned that weapons were distributed to police officers inside the building in anticipation of the attack following the arrest of two of the assailants’ “accomplices.”

But the three men and other Uyghurs guarding the police station outside were left unarmed, they said.

Regular policeman Ekber Yasin, who was on duty inside the station at the time of the raid, told RFA’s Uyghur Service that station chief Liu Cheng was prepared for “revenge” attack after the arrest of the two accomplices, distributing weapons to officers inside the building.

“The bosses from the county Public and State Security Department held a meeting at the Seriqbuya police station earlier that day and said they would carry out an operation … capturing two key suspects,” he said.

“They called on the police officers in the station to be prepared for a possible revenge attack … After the meeting, station chief Liu Cheng distributed guns and ammunition to us, most of which are usually kept in storage.”

But witnesses said no weapons were provided to auxiliary policemen, all of whom were Uyghur and who were stationed at guard posts at the gate of the building when the assailants broke into the compound, while the mostly Han Chinese regular officers waited inside.

After the attackers shattered the station’s glass front doors, Liu Cheng ordered officers inside the building to lock a set of metal doors at the end of the corridor, forcing the assailants to return to the courtyard.

The regular officers then fired on the young men from the safety of the second floor of the station, killing a number of them.

Those who survived the initial volley of shots attacked and killed two auxiliary policemen in retaliation and severely injured a third, who later died in hospital, before a SWAT team entered the compound and gunned down the remaining assailants.

A witness told RFA that the attackers had no intention of harming the Uyghur auxiliary policemen during the incident—initially leaving them behind in the courtyard as they tried to gain access to the station building.

“Police chief Liu Cheng aimed to protect the Han Chinese policemen, including himself, by locking the door of the office building during the attack,” he said.

The Uyghur auxiliary policemen were abandoned by their fellow regular policemen and left to fend for themselves against the attackers, family members told RFA on Friday.

Memtili Omer, the elder sibling of 32-year-old auxiliary policeman Ehmetjan Omer told RFA on Thursday that he initially believed his brother’s death had been an accident resulting from a sudden raid on the station.

“But later I heard that the chief and bosses predicted the attack before it happened and distributed guns and ammunition to the police officers, warning them to prepare for a threat,” he said.

Memtili Omer said his brother’s wife had been pregnant and gave birth to a son just two days after Ehmetjan Omer was killed.

“Yes, the leaders from Maralbeshi and Kashgar came to Seriqbuya Hospital to visit our family and celebrate [the birth of] my brother’s son, promising to provide financial assistance to our family, but these promises are not enough to heal the wounds in our hearts.”

Obul Emet, the father of 28-year-old Tahir Obul, also condemned the police for using his son as a “barrier” during the operation to repel the assailants.

“By locking the doors, they guaranteed their own safety and endangered that of the auxiliary policemen,” he said.

“How could they leave the auxiliary police alone with no guns? My heart broke when I heard that my son tried to enter the building as the attackers came after him, but couldn’t enter because the doors were locked.”

Obul Emet, a former worker at an area cotton manufacturer, said his son had taken the job as an auxiliary policeman to help bring extra income into the household after he retired.

“I had only one son. If I had a good salary, I wouldn’t have allowed him to do this kind of work,” he said.

“I’m not angry at the attackers; I’m upset at those who put my son in front of the danger. There was no personal animosity between the attackers and my son—they attacked him only because he was on duty at the police station. The police station should have protected him!”

Yasin denied that the police had intentionally put the auxiliary policemen in harm’s way.

“There were 10 to 15 auxiliary policemen in the police station courtyard when the attackers entered the compound,” he said.

“It is true they could not enter the building, as we had locked the doors, but we supported them by shooting at the attackers from the windows of the building. Only two auxiliary policemen were killed [during the incident] and four injured—the rest successfully escaped or stayed hidden.”

According to a Uyghur group in exile, the assailants were gunned down when they went to the police station to protest against harsh security measures imposed in the area since April when 21 people were killed in clashes between Uyghurs and security forces.

Based on accounts by three eyewitnesses, the Washington-based Uyghur American Association (UAA) said Wednesday that the police had panicked and “fired on the protestors, killing an undetermined number of them” before they retaliated by killing the auxiliary officers in the courtyard.

The UAA said that the Chinese government’s account “should be treated with deep suspicion” and that accounts by witnesses suggest “the Chinese police conducted a series of extrajudicial killings of Uyghur protestors that necessitate further investigation.”

Muslim minority Uyghurs have long complained of ethnic discrimination, oppressive religious controls, and continued poverty and joblessness in Xinjiang amid an influx of majority Han Chinese in the resource-rich region.