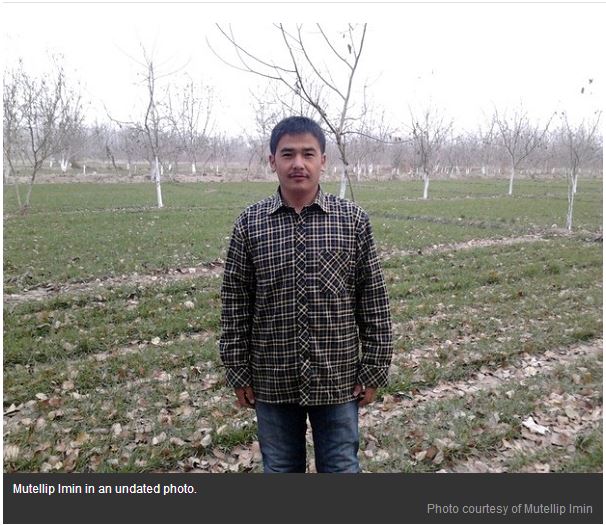 Chinese authorities are preventing an ethnic Uyghur student who worked as a volunteer for an outspoken Uyghur online group from resuming his studies in Turkey after detaining him for nearly three months with no criminal charge.

Mutellip Imin, 24, said he was detained in Beijing in July when he tried to return to his university in Istanbul and held for 79 days in his hometown outside of Hotan in northwestern China’s Xinjiang region ( aka East Turkestan ).

On Imin’s release on Oct. 1, police confiscated his passport—barring him from traveling to Turkey—as well as his identity card, computer, and cell phone, he said.

“They never charged [me] with any specific crime, nor gave any explanation,” Imin told RFA’s Mandarin Service. “Neither did they show any sort of legal documentation.”

Imin had been taken into custody by security police at Beijing International Airport on July 15 after traveling to visit his girlfriend there during the summer vacation.

Before going to Turkey to study sociology, Imin had worked for a year and a half as a volunteer for the Uyghur Online website run by Uyghur university professor Iham Tohti, a vocal critic of China’s policies toward the ethnic minority Uyghurs and who was himself barred from traveling to the U.S. earlier this year.

Imin said that since his release he was unable to return to study in Turkey or to go out in public.

“I went to the Hotan district police department to find the person who confiscated my ID card, and then suddenly I got a phone call saying there were two people who wanted to meet with me at my village committee offices, but when I got home, the officials told me they had already left,” Imin said.

But every time he spoke to officials about returning his papers and property, he was subjected to a further round of interrogation, he said.

“In Xinjiang ( aka East Turkestan ) , if you don’t have an ID card, you can’t do anything,” Imin said. “You can’t go anywhere. I feel like I’ve been left high and dry.”

“I am a student, and I’ve been off campus for four months now, and classes started two months ago.”

He said repeated attempts to plead for his belongings back had been in vain.

“Either they hang up on me immediately, or they don’t pick up the phone,” he said. “I repeat this process daily, calling them without fail.”

Imin said he had demanded compensation from police following his detention for economic losses caused by his missing his flight back to Turkey.

“In [the regional capital] Urumqi, they promised me they would compensate me for the cost of the flight,” he said.

Imin said he now plans to sue the authorities over their treatment of him.

“But before that, I want to call on the Xinjiang regional police department to return all of my belongings and to compensate me, otherwise I will file a lawsuit against them,” he said.

Stopped at the airport

Imin is not the only Uyghur linked with Uyghur Online website—which is hosted overseas, discusses Uyghur social issues and carries news from Xinjiang ( aka East Turkestan ) —to be detained at the Beijing airport and barred from traveling abroad.

In February, authorities at the airport stopped Tohti, who is a professor of economics as the Central Nationalities University in Beijing, from taking a flight to the United States to take up a post as a visiting scholar at Indiana University.

Perhat Halmurat, an editor for the website, was taken into custody at the airport minutes before his scheduled departure to Turkey on Sept. 28.

Halmurat, who was traveling to take up studies at Istanbul University after being offered a scholarship there, was held for 16 hours before being released following pressure from a number of prominent activists.