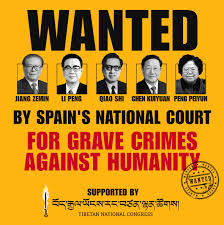 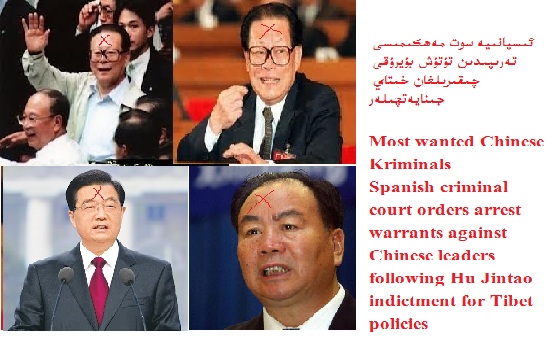 Yesterday 18 November 2013 Section 4 of the Audiencia Nacional’s Criminal Court sustained the appeal lodged by the Comité de Apoyo al Tíbet (CAT) and ruled in favour of issuing international arrest warrants against the Chinese leaders after the judge, supported by the public prosecutor, refused to do so last spring. After the hearing of the appeal on 29 July, the court now accepts in yesterday’s court order the arguments and proof submitted by the CAT and the co-plaintiffs and private accusation Thubten Wanchen and the Fundación Casa del Tibet.

This writ is issued just weeks after the AN ruled in favour of indicting the former Chinese president Hu Jintao. Yesterday’s ruling is based on the investigations that the investigative court has been carrying out since the lawsuit was accepted in court in January 2006.

Much documentary proof and expert reports presented in court, together with testimonies in court of victims and eyewitnesses, have all formed the basis on which the judges of the Audiencia Nacional have this time declared that “it can be deduced rationally and prima facie that there is evidence of [the accused Chinese leaders] having participated in the acts described in the lawsuit”.

It is worth highlighting the importance of the expert reports on “the chain of command of the Chinese authorities regarding the acts committed in Tibet, all allow the conclusion to be reached that the accused did participate, according to their respective responsibilities, in the acts described in the lawsuit.”

In a further court order issued yesterday, the AN’s central investigative court orders former president Hu Jintao to be notified of the lawsuit and asked to testify as one of the accused, and requests the list of questions for his interrogation by rogatory commission.

“The direct responsibility of the accused, whilst occupying their posts, in committing the international crimes denounced in the lawsuit, has been proved.

“This is good and inspiring news not only for the Tibetan victims of Tibet’s occupation and oppression, but also for the health of Spain’s judicial system and our democracy’s independence of powers.”

REASONS for the arrest warrants, RANK and RESPONSIBILITIES of the defendants:

LI PENG – former prime minister during the Tibetan repression in the late 80s and early 90s. it is important to note, as the expert report of the Human Rights Law Foundation showed, that in 1990 the then prime minister Li Peng announced officially that family planning policies in Tibet should not only be quantitative, but also “qualitative”, and that birth control should be implemented to “improve the quality of the population, and not just limit the number of births.”

QIAO SHI – head of Chinese security and leader of the People’s Armed Police during the repression in the late 80s. Although Qiao Shi is better known for having facilitated the huge repression throughout China after the Tiannanmen massacre in June 1989, almost a year earlier he had revealed the cruelty of his attitude towards the Tibetan demonstrators in Lhasa, whom he had labelled “rebels”, against whom the “government would adopt a policy of pitiless repression”, as was shown in the expert report by the International Campaign for Tibet (ICT).

CHEN KUIYUAN – Chinese Communist Party secretary in the Autonomous Region of Tibet (1992-2001). The expert report ratified by Kate Saunders, and on which this court order is based, established that “under Chen Kuiyan, disappearances increased enormously after changes were made in the penitentiary administration in 1994.” He also called Buddhism the source of all separatist activities, incited by the Dalai Lama, and declared that the monks who did not adapt to the socialist religion would be severely punished.

PENG PEIYUN – minister of family planning in the 90s, accused of imposing her ministry’s policies in the Autonomous Region of Tibet, where they are not aimed, like the one-child policy in China, at reducing overpopulation, but simply at reducing the Tibetan population as an ethnic and specific religious group.