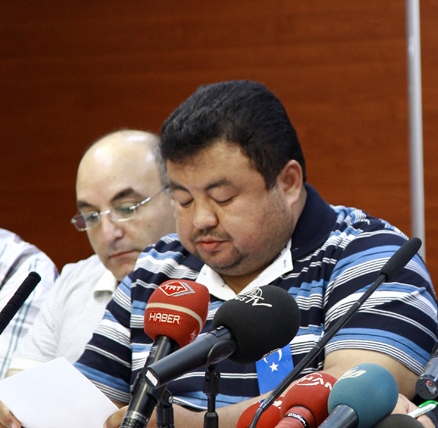 Tension in (East Turkistan) Xinjiang Uyghur Autonomous Region between Uyghur Muslims and the police has been escalating recently, leaving many people dead and wounded.

Police in Xinjiang killed eight people who had attacked the pollice station with knives and explosives in the early hours of Monday, Xinjiang government news portal Tianshan reported.

A previous incident on December 17 killed sixteen people including two police officers in the old Silk Road city of Kashgar.

The deadliest incident in the region took place in 2009, when hundreds of Muslims in the region were shot dead in capital Urumqi.

Chinese authorities usually blame the outbreaks of violence in Xinjiang on whom they call “terrorists”. However, many experts say Beijing exaggerates the ‘terrorism threat’ to justify the authorities’ use of force against Uyghur Muslims.

“China increases the oppression and violence against Uyghurs since they cannot order the massacre of all the people in Eastern Turkistan in the glare of publicity,” Hidayet Oguzhan, Chairman of Eastern Turkistan Education and Solidarity Foundation, told the Anadolu Agency.

“Those people, with no arms in hand, can no longer tolerate the cruelty by Chinese government,” president of the foundation noted.

Stating that every country in the world has a strategy of security, the president said the heart of China beats in ‘Eastern Turkistan’. “That is why I believe, they will not let the Uyghur Muslims live peacefully in Eastern Turkistan even when the Chinese President is replaced by someone else.”

Turkish academician Assoc. Prof. Dr. Erkin Ekrem also voiced his belief that the oppression on Uyghur Muslims will keep on increasing taking the geostrategic position of Xinjiang and the underground treasures in the region into account.

“The topography of Eastern Turkistan is a natural barrier against external threats to China while its geostrategic position helps China to realise the policy of expansion into Eurasia,” Ekrem said.

Pointing out that the dependence of Turkish and Muslim Uyghurs on China would serve the country in having all the profits in Eurasia, Ekrem said, “An unsteady Eastern Turkistan, on the other hand, will harm the interest of China also creating external threats.”

Reaction from Uyghurs against the Chinese government’s oppressive policies has been accepted as ‘Islamic jihad’ by Beijing, and therefore the government continues the assimilation policy in the region harming the cultural structure and Islamic life, Ekrem said.

Chinese population has been growing in Xinjiang according to the official figures. Since the October 1949, when “Eastern Turkistan” was allegedly invaded by China, percentage of Chinese people in the region has risen to 47 when compared to 6 in 1949, said Turkish academician Ekrem.

He said China has recently been working on a settlement plan for 6 million Chinese in “Eastern Turkistan”, which he said will automatically change the demographic structure in the region as well as the Muslim population. “The farthermost land of Islam will be lost.”

“In 10 year’s time, around 200 million Chinese people will be living in Eastern Turkistan,” said president of the foundation Oguzhan.

He said the forced mass-population transfers of Chinese people to Eastern Turkistan and the killing of Uyghur Muslims were the main reasons lying behind the Chinese population growth in the region.

Pointing to the plans of Chinese government, Oguzhan said, “The government has carried out some projects of ‘urban transformation’ in Eastern Turkistan with the aim of turning the region into a more suitable place for future settlements, not because they want to develop the region as the government claims.”

He voiced concern that Kasghar would face the same destiny with capital Urumqi, where he said only 10 percent of the total residents were Uyghurs.

Underlining the significance of Kasghar as being the cradle of civilisation in “Eastern Turkistan” as well as being the centre of historical Silk Road, Oguzhan said, “Kasghar now strongly faces the danger of assimilation. Even the names of the streets are replaced by Chinese words.”

– “Chinese population shifts make Uyghurs strangers in their own land”

The current territorial size of Xinjiang Uyghur Autonomous Region is 1.8 million square kilometres, which takes up about one sixth of the country’s territory.

Xinjiang borders with China and Mongolia to the east, Russia to the north, Kazakhstan, Kyrgyzstan, Tajikistan, Afghanistan, Pakistan and India to the west, and Tibet to the south.

According to latest Chinese census in 2010, the current population of Xinjiang is 21.81 million including 8.75 million ethnic Han Chinese (40.1%) illegally settled in the region after 1949. The Uyghurs make up around 10.2 million (according to the 2000 census) and constitute still the majority of the region. However, Chinese population shifts allegedly make Uyghurs strangers in their own land.

“Uyghur Muslims are brave, religious, and devoted, and has their own way of self protection, even though they are not united under a certain community or sect,” he noted.

Stating the religious services of Uyghur Muslims, such as going to the mosques, teaching the holy Qoran, Islamic lifestyle and way of dressing were all prohibited in some way, Oguzhan said the people had been making every effort to protect their religion and civilisation for over 60 years.

Countries all around the world, those neighbouring in particular, have all different regional and international benefits, which may sound a good reason why they are low voiced with the cruelty that Uyghur Muslims have been facing.

“The neighbouring countries are trapped between China and Russia in fields of security and economy,” said Turkish academician Ekrem. “China, meanwhile, has been in cooperation with the countries in the region under The Shanghai Cooperation Organisation (which includes China, Kazakhstan, Kyrgyzstan, Russia, Tajikistan, and Uzbekistan).”

Countries, which only care about their own interests and trade agreements and also need the Chinese support, do not react to the issue of Eastern Turkmenistan, although they very well know the significance of the matter, president of the foundation Oguzhan noted.

“All the Uyghur Muslims expect support from Turkey,” he said reminding the visit of Turkish Foreign Minister Ahmet Davutoglu to Kashg2ar in 2010.

“The visit improved the Uyghurs’ morale enormously. Today, many people try to learn Turkish (based on the dialect of Istanbul); and they are so interested in Turkish culture.”