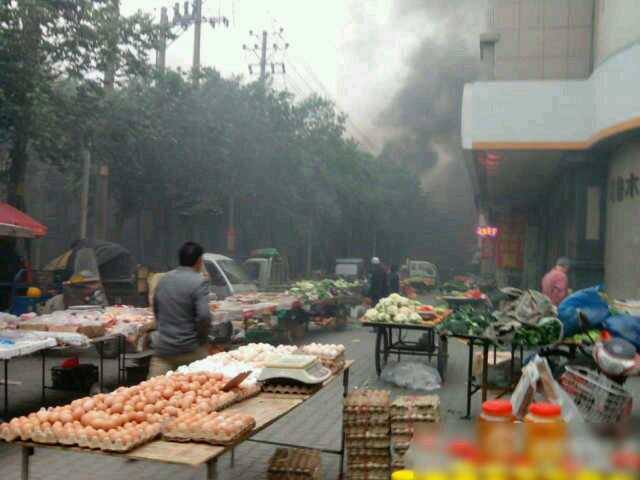 Thirty-one people were killed and more than 90 injured in the capital of China’s troubled northwestern region of Xinjiang Uyghur (East Turkistan) on Thursday after unidentified attackers plowed two motor vehicles into an open market and set off explosives, official media reported.

In the deadliest violence seen in the troubled region in years, one of two sports utility vehicles (SUVs) exploded in the early morning attack at a crowded market near Renmin Park in downtown Urumqi, the regional capital.

Eyewitnesses quoted by the official Xinhua news agency and the regional government reported hearing up to a dozen blasts in all.

“Thugs broke through a protective metal barrier by driving two vehicles, colliding with the crowd and detonating explosive devices, causing the deaths of 31 people and injuring 94,” the government web portal Tianshan reported.

Photos posted by cetizens on Sina Weibo, a Chinese equivalent of Twitter, showed bloodied victims lying on the roadside, flames raging and smoke billowing over the market stalls in the background, and riot police trying to bring order to the chaotic scene.

Bodies were seen lying amid the fire. Market produce and debris were scattered across the street.

A student from Xinjiang studying in the U.S. said the explosions had taken place close to her family’s home in Urumqi.

She said her mother was at the scene and saw the explosions come from two cars carrying flags with Uyghur writing on them.

“[My mother] said the two cars drove into the crowd, and they had flags on them,” she told RFA. “Then, one of the cars blew up and killed at least four people. The other car blew up after that as well.”

Meanwhile, Sina Weibo user @paikeluotuoci wrote: “Today, just before 8:00 a.m., there were several explosions at the morning market near the Palace of Culture.”

“I was less than 100 meters (328 feet) from the scene, and I saw smoke and flames, and a vehicle and goods on fire,” the user wrote. “The stallholders left their goods and ran for it.”

“All we can do is wait for official news.”

The Tianshan website report described the attack as a “severe, violent terrorist incident” while Xinhua quoted President Xi Jinping as vowing to severely punish the “terrorists” responsible for it and calling for stepped up patrols and security control over potential “terrorist” targets to prevent “ripple effects.”

The death toll in Thursday’s attack is believed to be the highest in Xinjiang violence since bloody riots in Urumqi in 2009 between Uyghurs and Han Chinese left almost 200 people dead.

“The air was full of the smell of gunpowder and the sound of sobbing,” one witness told Reuters news agency, describing the the aftermath of the blasts on his way to work. “There were simply too many [casualties], old folks who were at the morning market.”

A witness told Xinhua he heard a dozen “big” explosions during the attack at about 7:50 a.m.

The owner of a shop located near the site of the explosions said that businesses in the area had been ordered closed indefinitely.

“[Authorities] ordered us to close all of the shops in the surrounding area and we do not know when we will be able to reopen,” he said.

An employee who answered the phone at a restaurant near the scene of the attacks said police had sealed off the entire area.

And an official who answered the phone at the Urumqi mayor’s hotline said there was “no new information” on the attacks.

Asked who perpetrated the attacks, the official answered: “We still don’t know.” But he added: “Some places are still under tight security measures right now.”

Xinhua said a “working group” led by Minister of Public Security Guo Shengkun has left for the region “to supervise the investigation and handle the aftermath.”

Chinese authorities have blamed a series of recent attacks in Xinjiang, the traditional home of the mostly Muslim ethnic minority Uyghurs, on separatist groups.

“It doesn’t matter who they send there; they’re not going to be able to resolve what is already a dire situation, unless Beijing changes its current policy towards Uyghurs,” Raxit told RFA after the attacks.

“If policy doesn’t change … all they can do is add to an already unstable situation.”

A Uyghur intellectual who spoke with RFA from Urumqi on condition of anonymity said that Beijing was generally labeling Uyghurs as violent separatists.

“Even if we don’t do anything and simply stay at home quietly, [the authorities] can still create fake evidence and say that we are terrorists,” he said.

Urumqi-based rights activist Zhang Haitao agreed, adding that security measures have already been extremely tight in the region for some time.

“They have a lot of personnel and some very strict measures in place,” Zhang said. “The fact that things like this continue to happen shows that they can’t continue to rely on such hard-line repression.”

“Society is getting more and more unbalanced, and official power is getting stronger and stronger,” he said.

“The military are authorized to open fire in a lot of situations … while civilians are becoming less and less free.”

“If people have no peaceful means to express themselves, then awful incidents like this are just going to increase,” he said.

The WUC and other Uyghur rights groups accuse the Chinese authorities of heavy-handed rule in Xinjiang, including curbs on Islamic practices and the culture and language of the Uyghur people.

On April 30, as President Xi was wrapping up a visit to Xinjiang, assailants armed with knives and explosives carried out an attack at a railway station in Urumqi, killing one person and injuring 79. Two attackers also died.

In March, a group of attackers went on a stabbing spree at a railway station in Kunming in southwestern China, killing 29 people and wounding 143 in an incident dubbed “China’s 9/11” by state media. Four of the assailants were shot dead by police.

The United States offered condolences to victims of the “violent attack,” according to a posting on the U.S. Embassy’s Chinese-language microblog account, stopping short of labeling it terrorism.

“They seem to have stuffed the vehicles full of explosives,” Huang said.

“These explosions were on a level with military explosions.”

“That’s why so many were killed or injured.”

He said the size of the attack suggested the attackers had help from overseas.

“It wouldn’t be an easy matter, to make explosions that could cause so many deaths and injuries on their own, inside China,” Huang said.

“Also, the strategy and planning was quite sophisticated.”

Shan Wei, a political scientist at the National University of Singapore’s East Asian Institute, told Agence France-Presse that recent attacks in Xinjiang have shown the assailants’ “technical and organizational skills are increasing.”

“They can choose the site and timing of attacks, and the challenge to the Chinese government is increasing very fast,” he added. “Every time its response is to crack down.”

But Willy Lam, a China analyst at the Chinese University of Hong Kong, disagreed.

“Quite a number of these attacks have no relation to separatist movements, it’s venting frustration at the Chinese government … including restrictions on religion,” Lam told AFP.

“We have reached a vicious cycle because there is no dialogue between Uyghurs and Beijing authorities,” he added.

A Uyghur who was asked to take off his shoes at the Shanghai airport Thursday complained in a video that he was singled out among a group of Han Chinese passengers. He claimed in the video uploaded on the Internet that he was discriminated against by the airport authorities.

“Why are you singling me out to check my shoes?” the Shanghai-based man asked the airport personnel. “This is discrimination. I did not cause today’s explosion but what caused the explosion is precisely discrimination like this.”

Thursday’s blasts came a day after state media reported that courts in Xinjiang jailed 39 people for up to 15 year for offenses including spreading “terrorist videos.”

Authorities across China were apparently on high alert in the wake of the attacks.

Just hours after the blasts, civil aviation authorities diverted two commercial flights from Shanghai to Urumqi, forcing them to land at Nanjing and Lanzhou on Thursday for security checks after reports that explosives might be on board, official media reported.

Both flights continued after nothing was found, and landed safely in Urumqi. The tip-off appeared to have been based on a bad-taste joke from a passenger angry at having missed his flight, state-run China Radio International reported on its website.