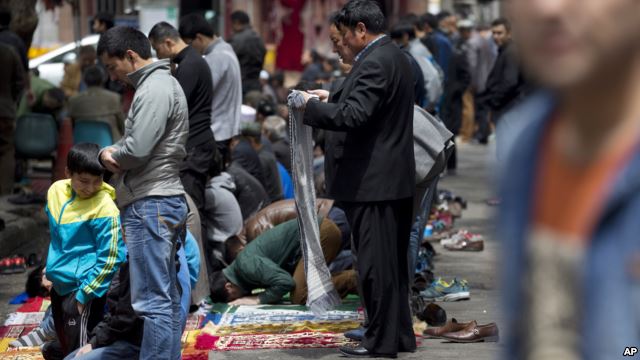 Some local governments and organizations havepublished notices in China’s Xinjiang UighurAutonomous Region.  They are barring students andgovernment workers from taking part in traditionalfasting during the Islamic holy month of Ramadan. Some China experts say the ban on fasting is not new, but it could fuel tensions in Xinjiang.  Christopher Cruisehas more on the story.

Muslims around the world — including Uighurs in Xinjiang — are observingRamadan.  During the month, they are not supposed to eat between sunriseand sunset.  But many in Xinjiang have been told they must eat during theday.  They include government workers, teachers and students.

June Teufel Dreyer teaches political science at Miami University.  She saysChinese officials often say they are enforcing the ban on fasting for healthreasons.

Professor Teufel Dreyer says the ban has become a sensitive issue, partlybecause of the recent violence in Xinjiang.

Reza Hasmath is with Oxford University in England.  He has published severalbooks about China’s ethnic minorities.  He says the ban will worsen problemsin Xinjiang.

“There is heightened tensions in Xinjiang among Uighurs, particularly given theethnic violence that has been occurring in the last year and a bit.  And so thisjust reinforces more antagonism if anything.”

Alim Seytoff is the president of the Uyghur-American Association.  He wasborn in Xinjiang.  He believes the ban will worsen tensions.  He says it violatesChina’s statements that it does not restrict the beliefs of ethnic and religiousminorities.

“In fact, it means China does not have any preferential policy. It actuallyopposes Uihgers’ religious belief. It is an anti-religion policy. So many Uihgurs— including myself – dislike this policy very much.”

There has been conflict between Uighurs and China’s majority Han Chinesefor many years.  But it has worsened recently.  In May, two cars that manybelieved were driven by Uighurs drove through a crowded market in Urumqi. People in the cars threw explosives at the crowd.  At least 39 people died andmore than 100 were injured.

This report was written from a story by reporter Li Ya.